For most Americans, household chores rank right up there with paying taxes as the things we dread the most. There may be no more tedious task that spiffing up the bathroom, specifically scrubbing and disinfecting the toilet bowl. While none of us wants to get on our hands and knees to sanitize the “porcelain throne,” it is part of American’s cleaning routine, according to a national survey conducted by Altan Robotech.

Four out of every five people we surveyed (80%) spend less than two hours a day on household chores. That’s the same amount of time the respondents spent relaxing. There seems to be something wrong when we, as a society, are cleaning our house as much as we are sitting and spending time with friends and family. That could be why nearly two thirds (64%) of consumer respondents would buy a robot cleaner, such as the Giddel, to take care of this arduous chore.

Perhaps one reason so much time is spent cleaning is fear of germs. This is especially true when it comes to the bathroom, with a particular focus on the toilet. Half those surveyed found toilet cleaning to be “disgusting” and “tedious” (figure 1). Despite these feelings, 68% of the respondents scour the toilet every week, pulling out the toilet cleaning kit that includes detergent and the brush, and spending as much as a half hour disinfecting the bowl. 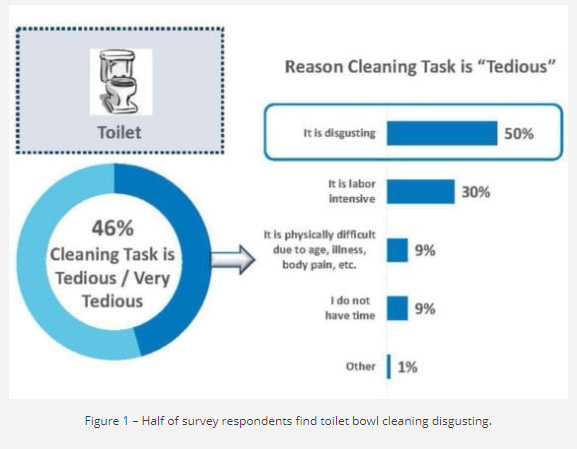 A growing number of domestic service robots, such as Giddel, are being used in more and more homes across America and throughout the world. Giddel is a replacement for the brushes that require you to don protective gloves and exert physical force to remove the stains found in the bowl, on the rim and even on the underside of the seat. Giddel, with any standard toilet-cleaning detergent, can completely disinfect your toilet bowl.

Robots such as Giddel are necessary given the fact that there are 3.2 million bacteria per square inch in a toilet bowl, according to research conducted by a luxury bathroom product manufacturer. Rather than using old-fashioned elbow grease, new technology allows toilets to be cleaned with the press of a button.

Germs Living in Your Toilet

Cleaning a toilet with a robot helps keep your bowl clean and germ free. It can remove the most common bacteria found in a bowl:

With bacteria such as those described above living in your toilet bowl, it should be a priority to clean it regularly. Equally important is to protect yourself against these germs when you are doing this chore. A toilet cleaning robot is your best solution.

Traits to Look for in a Service Robot

Survey respondents did have a concern about how good a job a robot could do. So, here are some things to look for when evaluating a robot cleaner that can keep your toilet bowl disinfected: 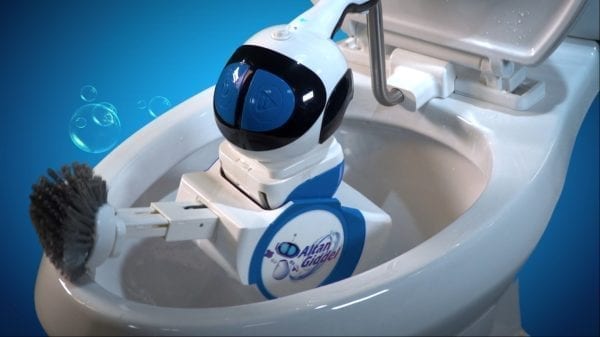 There is no doubt that regular cleaning and disinfecting of a toilet and entire bathroom is necessary to prevent sickness and disease. With a portable toilet cleaning robot, that disgusting and tedious chore no longer has to be done the old-fashioned way. Robotic technology, which the survey revealed was a desired alternative, can keep the toilet bowl clean while you spend time doing better things.